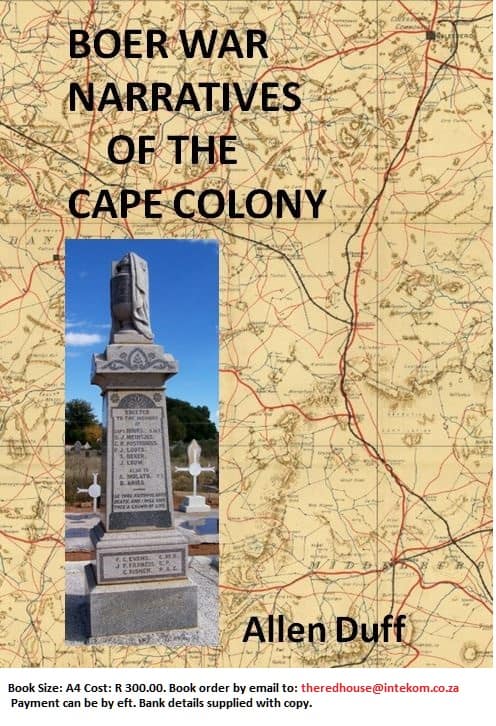 The Mount Hope Skirmish: The Fickle Finger of Fate

Scheepers Attack on a Cape Government Railway Train at Ganna

The Machine Gun on Worcester Hill

The Execution of the Cape Rebel Nicholaas van Wyk

The Final Phase of the Colesberg Campaign

The West Australians and the Featherstonehaugh Engagement

Malan and Fouche: The Last Days of the War. Part 1

Malan and Fouche: The Last Days of the War. Part 2

Scroll to the bottom for a detailed synopsis. 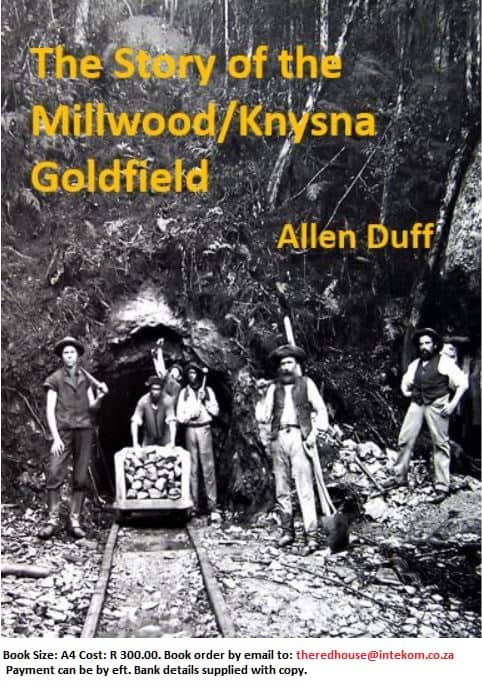 THE STORY OF THE MILLWOOD/KNYSNA GOLDFIELD
by Allen Duff.

The book is not a detailed chronological record of the mining endeavours at Millwood although some of those activities are integral to its history. The story is a narration of the goldfield’s development and decline, but more particularly it is the story of the lives of the people who lived and laboured there. Details of their lives provide a window of insight into their hopes and their fears.
The Millwood goldfield came and went more than 130 years ago when the world was, in many respects, a very different place. Hence it is the story not only of the fortune-seekers who went there, but also a glimpse into the Victorian world of the Southern Cape. This story of Millwood was gleaned and researched over a period of 50 years.
Thanks to intrepid photographers of the 1880s and 1890s, the book is illustrated with many historical photographs. There are also numerous colour photographs of recent activities and locations.
The story of Millwood does not end with the departure of the last persons who tried to extract Millwood’s illusive gold. A hundred years after Millwood’s heyday a few dreamt of and initiated a plan to recreate something of Millwood’s past. These attempts led to the creation of the Millwood Goldfield Society whose members made this vision a reality. Their achievements are also narrated in this story of Millwood. 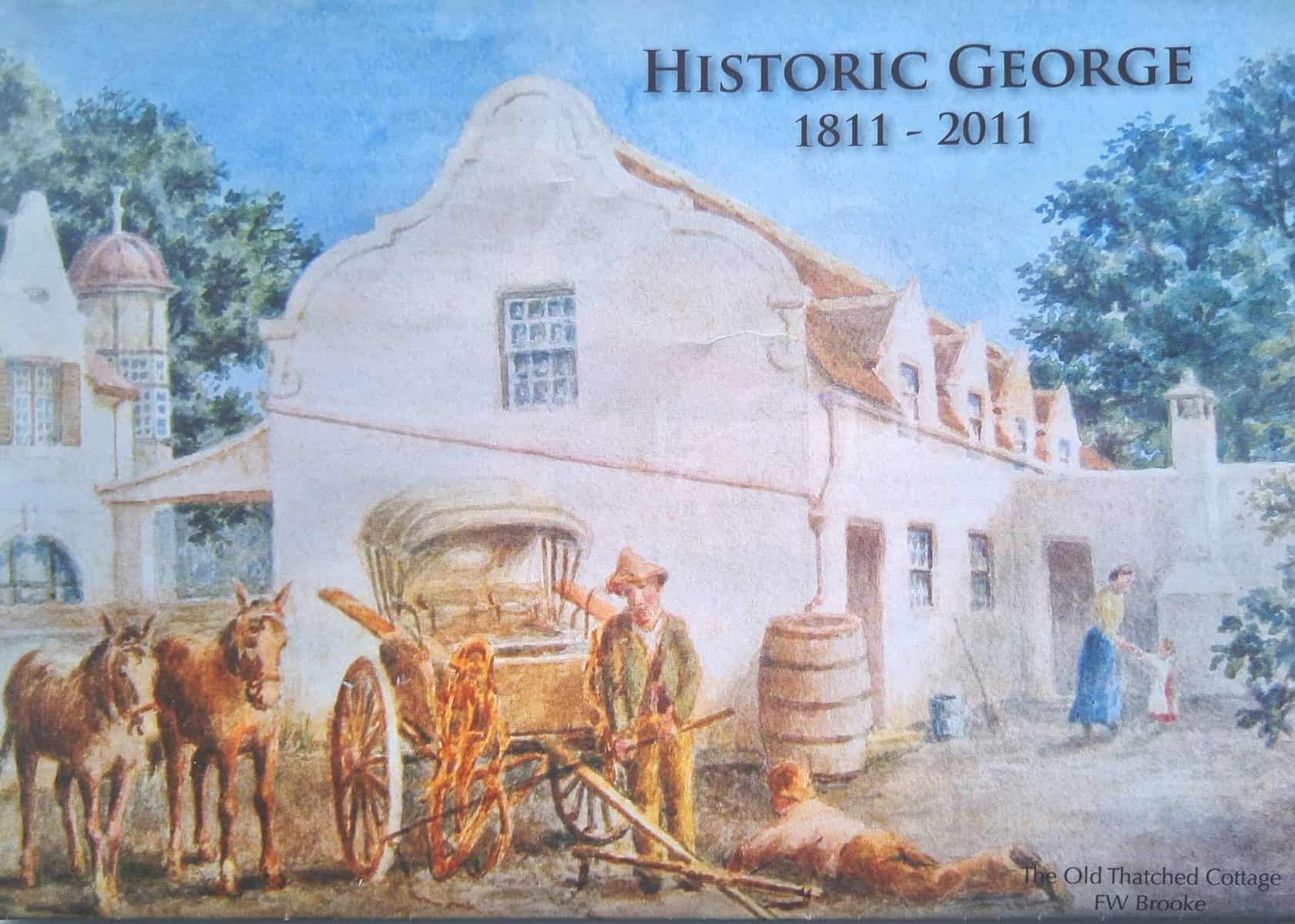 The “Historic George 1811 – 2011” brochure was published by the OHS for the commemoration of the Bicentennial of George. It highlights some of the historical events over 200 years.

Click on the title in the Archives tab under the History of George category to view the two pages of the Brochure. 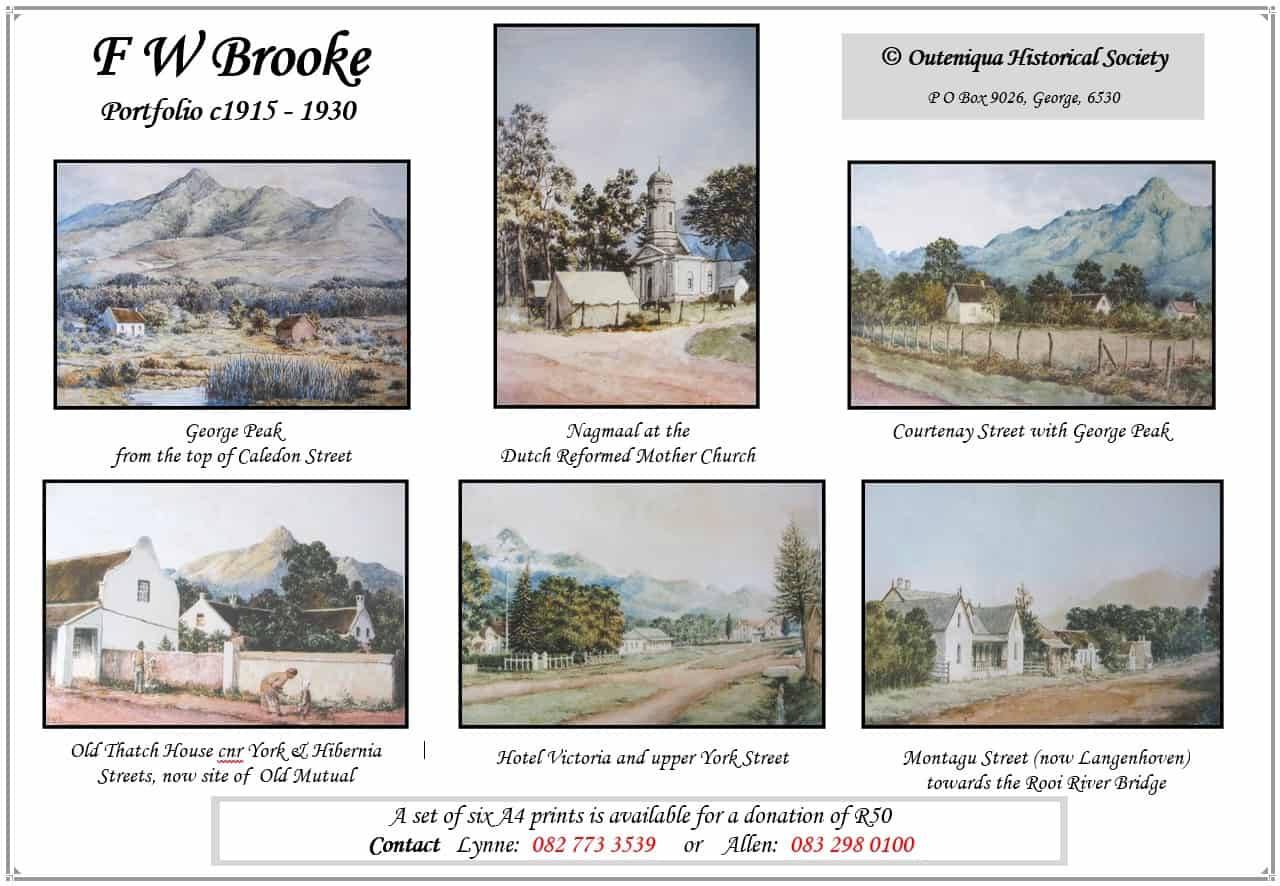 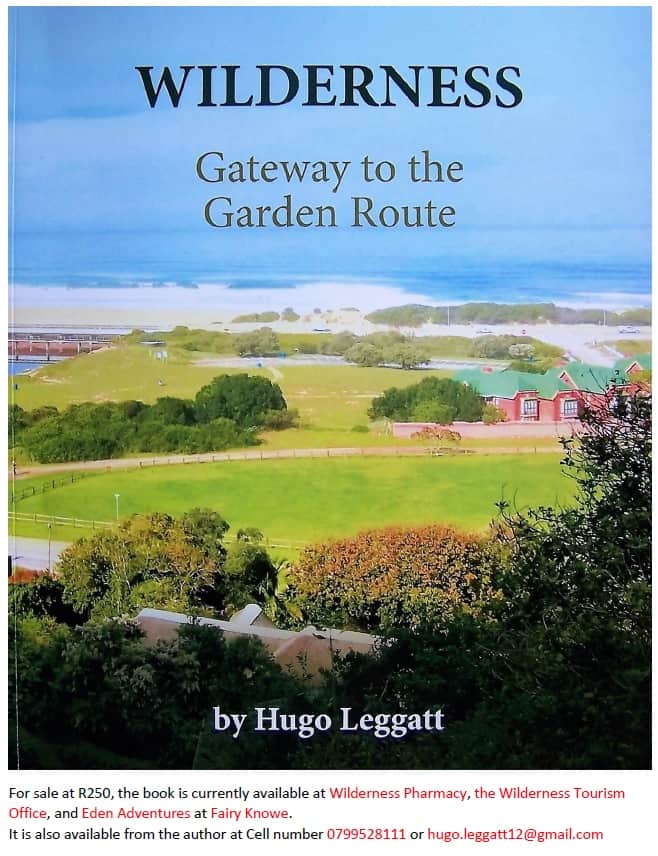 WILDERNESS : Gateway to the Garden Route

Wilderness, Gateway to the Garden Route opens with an outline of the early history of the region, introducing the earliest inhabitants and the later settlers. The 19th changes include the founding of George and the subsequent development of the early roads., as well as the great fire of 1869. After the establishment of the farm The Wilderness in the 1870s, the area remained a largely isolated beauty spot until the coming of the railway and, later the national road.
A major change occurred a century ago when the farm was bought by The Wilderness (1921) Ltd which started to develop what has become the modern village.
With over 50 photographs, the book introduces a fascinating line-up of characters and events, right up to the present. It should be of interest not only to residents but also to visitors and fans of the Garden Route.

These narratives are all people centred. They narrate the experiences of ordinary people who were overtaken by events which impacted considerably on their lives and which took some of their lives.

In the Mount Hope skirmish three young men of the George District Mounted Troop unexpectedly came face to face with the campaign-hardened veterans of General Jan Smuts’ commando. Chance and luck played their part along with Smuts’ sense of justice. One died, but the other two lived to be old men.

Scheepers attack on the train at Ganna siding is a dramatic narrative of night-time guerrilla warfare and the courage and dedication of railway employees.

The clash between Boer commandos and the soldiers of the Worcester regiment – known as Worcester Hill – is a well-known narrative. What is not well-known is the role played by the men who operated the machine gun and the Boers who captured it. This account narrates their personal experiences.

The Bamboesberg forms, in south-eastern South Africa, part of the extended mountain chain which demarcates the high interior plateau from the coastal region. The discovery of coal in the area and the establishment of the town of Molteno brought Englishman, Robert Blandy, to manage a number of coal mines. As the officer in charge of the district’s militia one of his tasks was to attempt the capture of Cape Rebels – Cape Colonists who sympathised with and actively supported the Boers. It was such a pursuit which resulted in his death in the high Bamboesberg.

Nicolaas van Wyk was one such Cape Rebel who was captured, tried and shot – as warning to others. Colesberg shop-owner, Thomas Jackson, photographed his execution. Over a hundred years later these photographs are published for the first time.

The final week of the Colesberg campaign saw British, Cape Colony and Australian forces from three states involved in numerous clashes which were adventurous and heated. The Victorian Tom Price – the only Australian to be given a command in the Boer War – led the Hanover Road Field Force which included Tasmanian Major Cyril Cameron. The advance of this force and the personal fortunes of Cameron are a fascinating narrative which occurs in a part of the Boer War which has been much neglected.

There is also a chapter on the adventurous trek of a section of the 1st Western Australian contingent – led by Captain Oliver – to the southern Cape Colony’s coast through the Klein Karoo. This trek culminated in a day-long fight with Kritzinger’s commando on the farm Featherstonehaugh. The Australians were eventually forced to surrender as their ammunition ran out.

The two final chapters cover the fortunes of Wynand Malan and Willem Fouche and their commandos in the final days of the war. Their pursuit by and clashes with forces which greatly outnumbered them and their evasion of capture till the peace treaty was signed, are covered with comment.

The author on a number of occasions visited all the locations covered by these narratives. The book has many black and white historical photographs and scores of present-day large  colour photographs so that the reader can experience almost first-hand the terrain and places where the narratives occurred.